On 6 November 2019 Heinz Mack and Antoon Melissen met in Mack’s studio for an interview about Lothar Wolleh. Mack was more than prepared and brimming with memories. And yet, it was only during this meeting – 40 years after Wolleh’s death – that Mack came to understand that Wolleh had “recognized the light”, and him. The following is an abridged version of the interview.

Hearing this, a monograph about Lothar Wolleh, instills me with particular sympathy. Right away I will tell you that we did know each other, but we were not all that close. We addressed each other using the formal term ‘Sie’. [laughs] It may be he concentrated more on [Günther] Uecker. They saw each other very often. And, what I would like to say is that back then no photographs were taken at all. Very rarely. […]

I got to know Wolleh fairly early on. And it was there…how should I explain it. Well, there are a few things I remember that I can perhaps relate to you straight away. There came a time when he wanted to photograph the best artists he could reach within a 100-kilometer radius and that is what he then did. And of course, he harbored the great hope that this would be published on an appropriately large scale. That was not so easy. Often, he had to invest mostly his own money as well in order to be able to realize it at all. Actually it’s very shameful, but that’s the reality. They were the well-known artists, Kricke, Klapheck, Uecker, Gerstner and the like

Wolleh was really a maverick

We have this in our archive, this portfolio. It was his initiative, unmistakably his initiative, an important one at that. Because it is also very valuable as a documentation.

[Mack looks through pages pertaining to him in Art Scene Düsseldorf]

This is great, of course! Wonderful! I love things like this. Simply splendidly made. Art Scene Düsseldorf was, if you like, the most important publication at the time. And precisely this kind of thing is what Wilp [the photographer Charles Wilp] did not do. He was just a man who needed contracts, from businesses, from industry. Wolleh was really a maverick. […] 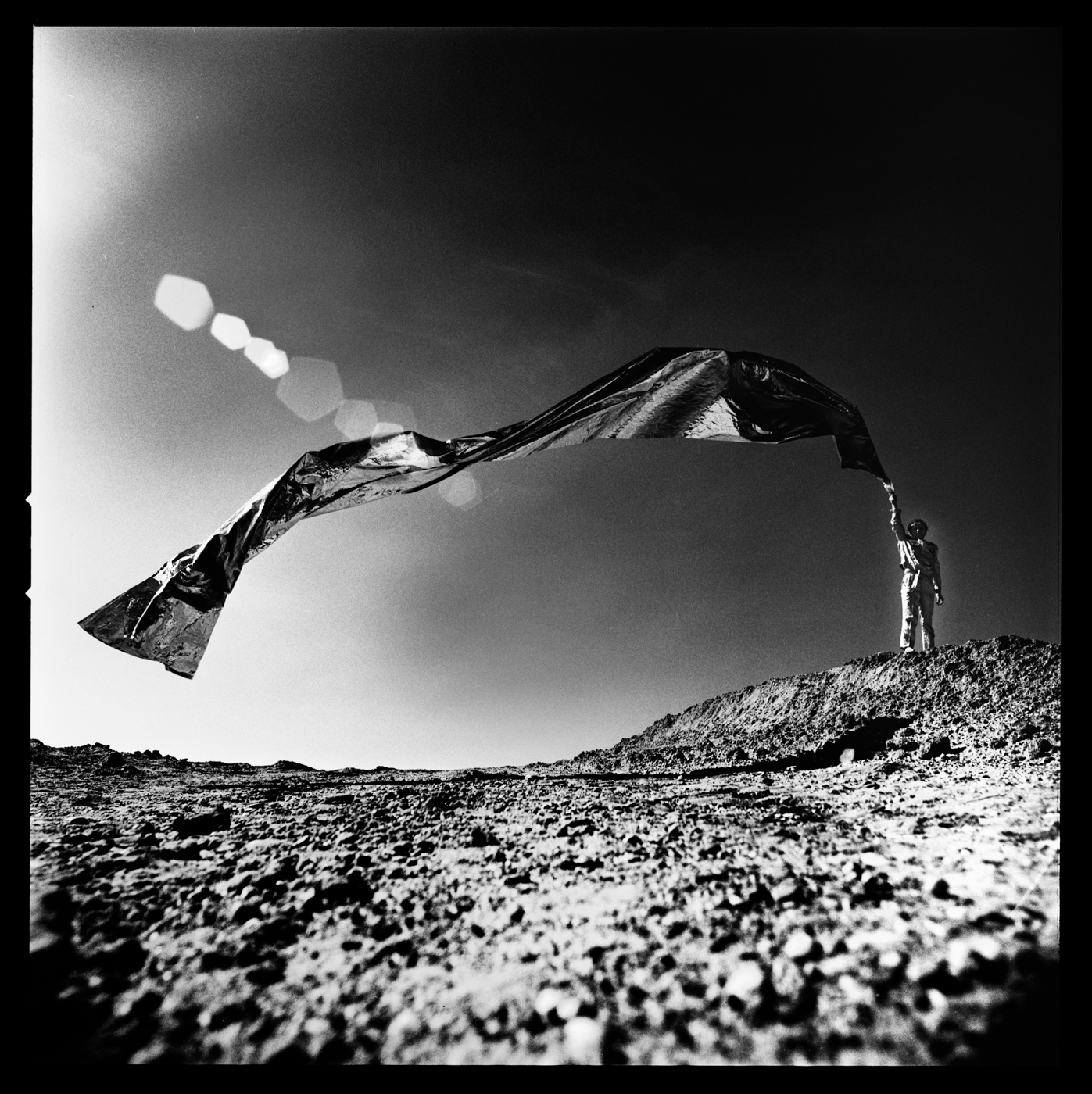 And this fundamental thought, that art is multipliable, all under the condition that it be of high quality and that the originality of the individual work not be endangered. And that it also be technically innovative, that was of course new, really new, at the time. And Wolleh was right on board in his own way. And even here, you can say in comparison, not to be critical, but just to compare, this is something that did not occur with Wilp.

And then he also tried out some things that were quite unusual for the time. For example, he traveled to Russia during the Cold War and then he came back and showed me slides. Color slides, some of which I no doubt kept for a while, but they were slides where you couldn’t recognize a …anything at all that was on them [laughs]. There was a kind of light wall with some kind of ray and then his imagination took off! “So Mack, you have to imagine there is an immaterial border, an immaterial barrier behind which things are happening we can’t imagine, and I photographed this and somehow these rays managed to come through this wall…” [laughs]. So he wanted to simulate for me that he had tried to photograph through a science-fictional wall, a fata-morgana wall that somehow hid secrets. That was a crazy idea. And I find it unbelievable! And what he was showing me there looked a little bit surreal, but it really was very mysterious. Then, I dare say perhaps at my suggestion, he also tried to photograph stars with their protuberances in the night. This corresponded with my Rotoren that I was making at the time. […]

ZERO sensitized Lothar Wolleh. He was interested in Africa as a theme and we were able to shoot a few photographs that were not made in the desert, but rather in a place where I then repeated things that I had done originally in the desert. The experiments began in 1963, and there were even those very first visits to the Tunisian desert that go back to 1958–1959. Wolleh’s pictures were done later, however. We were not in the desert together. We did them in a sand quarry here in Germany. And then, this may have been in 1968. And all this really intrigued him a lot, so that he translated that as well. So there is a photo where I have these entire sheets of foil wrapped round me, these mercury vaporized foils. Which also constitutes an odd analogy to the fact that today, when refugees are pulled out of the sea, they are all packed in these foil blankets because they keep you warm and these are all made of gold vaporized Mylar. This is really grotesque! That these people are as poor as church mice, but get cloaked in gold! Politics has an utter lack of feeling. It only sees that it holds warmth but the fact that this also has a metaphysical dimension, this is not taken into consideration. And then Wolleh also repeatedly tried to make photography into an object. It was his idea that for this photo where I have this stuff wrapped around me, that he would make a giant photo enlargement, and then we draped this original material. [...]

Wolleh was a very interesting man. I can’t deny that. Wolleh was, how should I put it: when he photographed something, he wanted to know everything connected with it, so in other words, he not only wanted to photograph the face, but he wanted to know “what kind of person is that, what does he do, what other things can be discovered here”. Wilp was entirely different. He was the reporter-type, so quick-quick, punctual – go there once… Wilp was incredibly fast. He had scarcely seen you before he was gone again. And Wolleh, by contrast, took a more contemplative attitude about the matter. [...]

There was a certain timidity

Wolleh was really a character, my complete respect. Schmela [Alfred Schmela, Galerie Schmela, Düsseldorf] was always amused. He said “His name isn’t Wolleh, but Wolle” [Wool]. [laughs] He even said this in public, Schmela could be naughty. [laughs] Wolleh was not the man to always immediately seize every opportunity. He was more reserved. He had a sensitiveness about him, you have to admit. And this sensitivity, alongside this, there was a certain shyness. He was not a go-getter in the sense of “Here I am!” To some extent, he was shy, but it went with his being sensitive and I always liked this about him. He could get real excited and embrace me in spirit. “This is really great, Mack, you understand that” and so on. This cooperative way of thinking was great, but basically, he was shy, and did not intrude. By contrast, Wilp always made an entry as if everyone had been waiting for him.

Photography is indeed light and time, in concentrated form. And well now, here we have hit on a theme. As far as I know, Wolleh had his own darkroom and he made his own prints. At the same time, I, too, already had access to a darkroom. This for the simple reason that I was the youngest teacher at a Düsseldorf high school with a large darkroom where I was able to work in peace. And I experimented there, did light experiments, photographic ones. I found that very exciting and I remember, though this is a faint memory, that in talking with me, Wolleh didn’t want to hear anything about it, these experiments with light. [...]

He recognized the light

[Mack looks at Wolleh's photos of his work]

These are my works! Now I am astounded again! But now I say the following: he photographed the works I made in a very exciting way. Yes, apparently it interested him. So, you see, again I am not well enough informed. By this, I only mean to say we did not speak about it. I have to say, I regard this sympathetically. It did fascinate him greatly after all. He indeed recognized the light. [...] 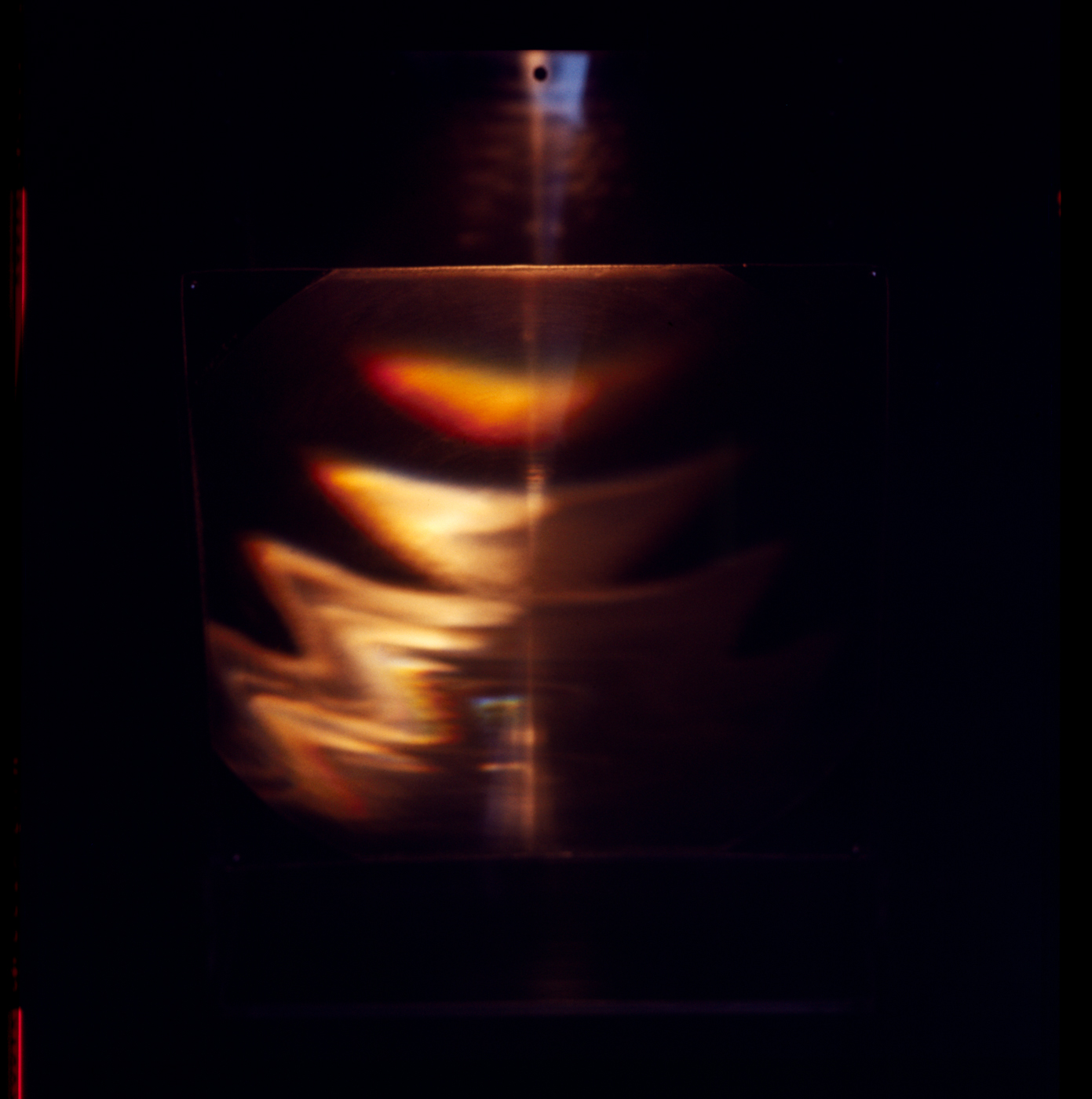 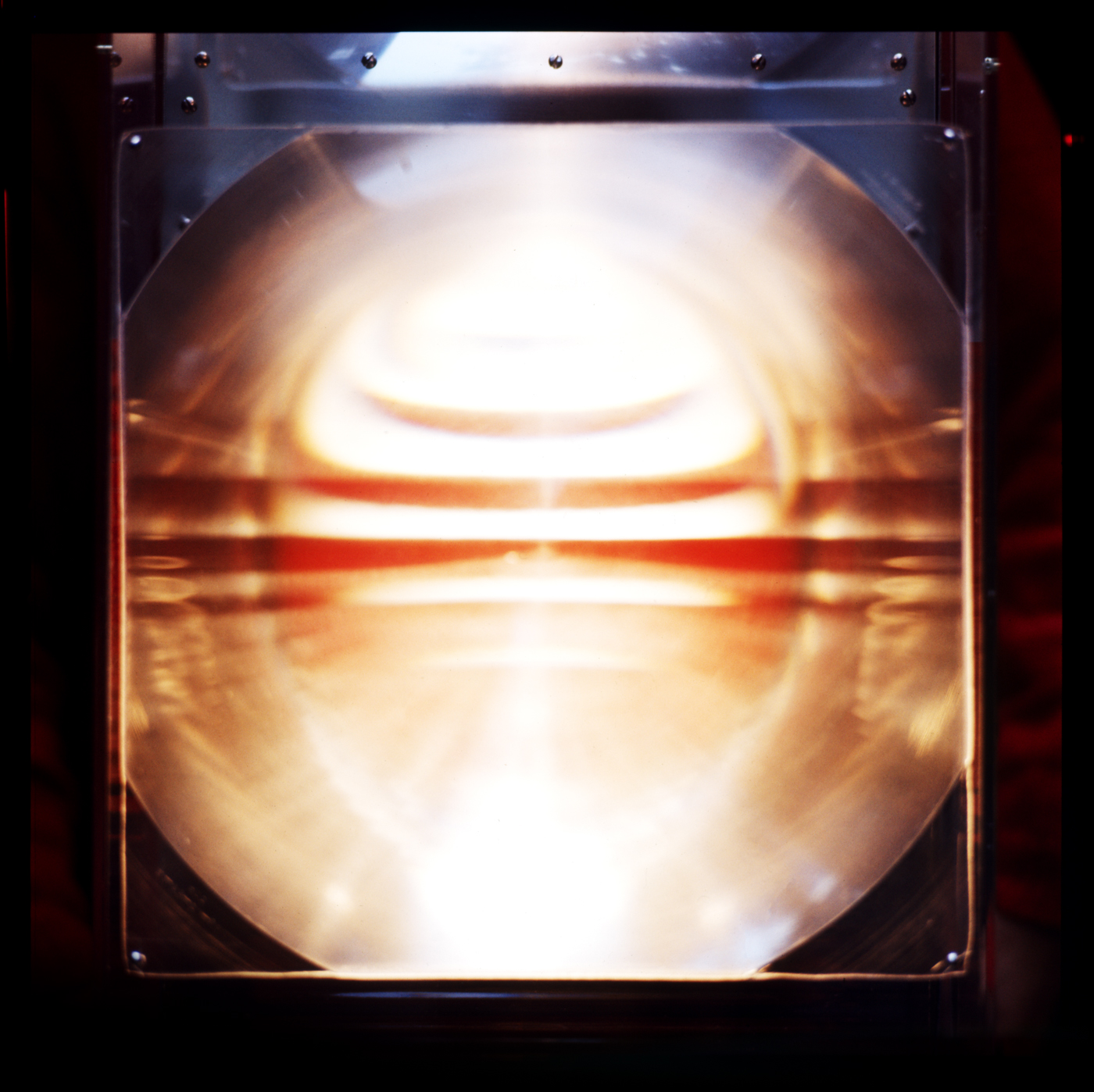 But these works by Wolleh have not been manipulated. Great photos, really very interesting. That’s mind-boggling! Highly interesting! First, a very concrete question, who is in charge of this… Oh, this one here is just great! Yes, who here is legally …That is a very important photo. Very, very important. I will allow myself to take a picture of it because I only have a lousy photograph of this work. [laughs] This is a work I have no idea where it is. So, you have come up with a great surprise for me! Yes, really, respect, respect…I do not know these pictures. [...]

I am very grateful that you have brought my attention to something completely unknown to me until now. The fact that Lothar Wolleh actually did look diligently at what was there, and that he took me much more seriously than I thought. [laughs] 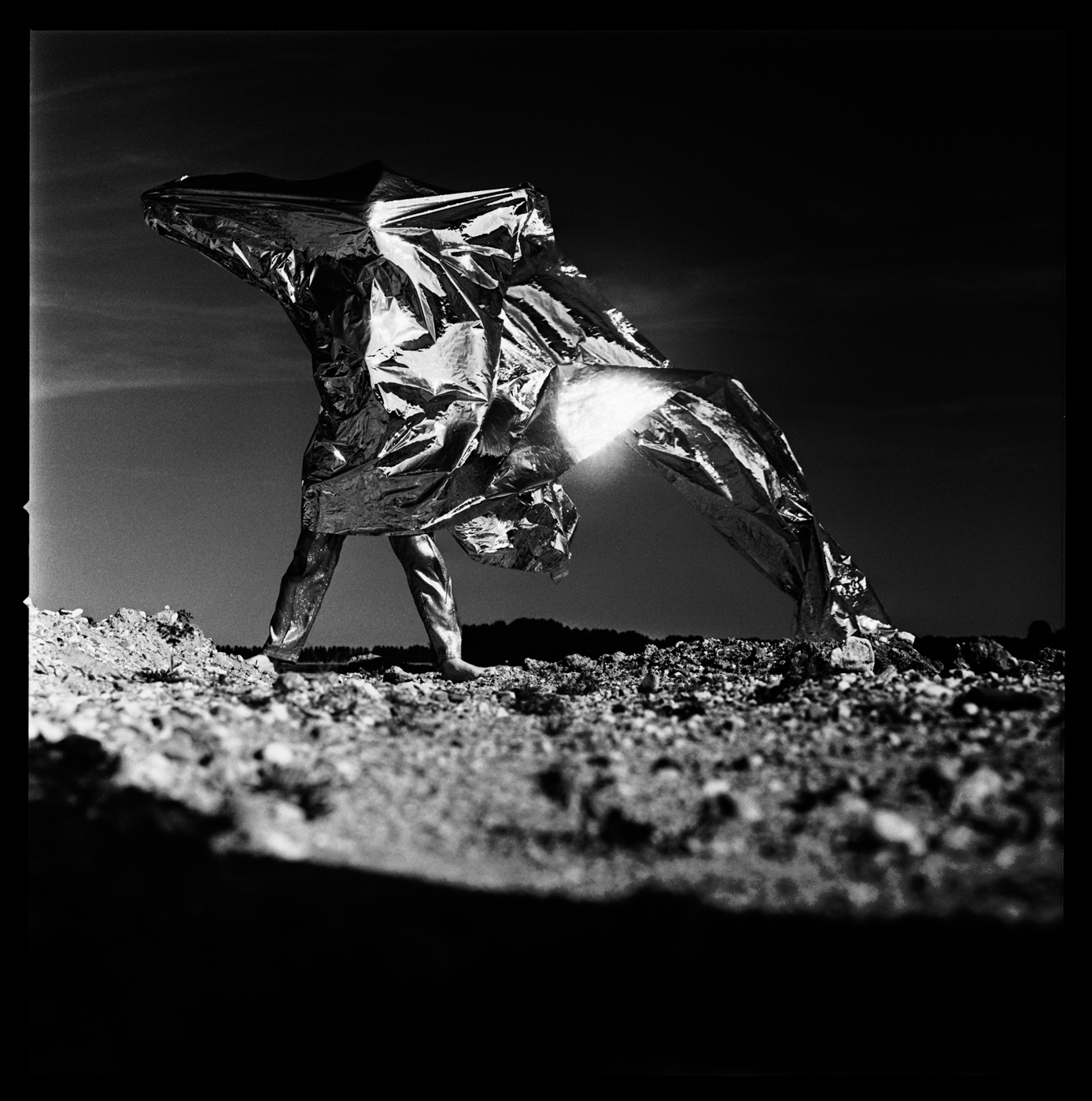